You are Braver
than the Storm.

Glen was diagnosed with Esophageal cancer in November of 2018.

Glen had problems swallowing in September of 2018 which made him make an appointment with his doctor. He then proceeded to get an endoscopy done on October 30th, 2018, which showed his esophagus was inflamed and red, but the doctor did not think it was anything serious. But, they took a biopsy just to be safe.

It turned out it was esophageal cancer and our world changed on November 1st, 2018, forever.

Glen had a CT scan done on his 54th birthday a week later to make sure it had not spread; and it had not, so God was with us that day! He had an EBUS PROCEDURE next to determine where exactly it was and what stage it was at, and we found out it was stage 3 cancer and the tumor was approximately 6 inches long.

For those that don’t know, the esophagus is 10 inches long, so his tumor was quite large/long.

Next, Glen was sent to a surgeon in Duluth, MN to discuss a surgery to remove the tumor after doing chemotherapy and radiation. Our next step was to have a PET scan from base of skull to his mid-thigh, it was very stressful & nerve racking! The test showed that he had a lymph node, one in each lung, that lit up- meaning that there was something there that should not have been.

He then had to go in for a procedure to take a sample from each lymph node to determine if they were cancerous or not. The doctors could reach one (it had cancer cells in it) but not the other one, as it was too deep. They decided to widen the area of radiation to be on the safe side even though it takes a toll on your body.

We then met with the Oncologist and the Radiologist to decide a treatment regimen. Glen had 25 radiation treatments, 5 times per week and 6 heavy doses of chemo, once a week, over a 6-week period between December 2018 and January 2019.

He graduated from chemo/radiation on January 18th.

Glen then had approximately 6 weeks of healing and rest before doing another CT scan in the beginning of March of 2019.The scan came back that the tumor was shrinking and had not spread! The lymph nodes were barely visible but the Radiologist did catch a tiny blood clot on his left lung. So, we started treatment right away!

A full PET scan was ordered for the 1st of April by the oncologist but instead we decided to go to the Mayo Clinic in Rochester, MN for a second complete evaluation/opinion. On April 23rd we saw the surgeon, and the Oncologist team, they ran tests, scans, blood work, EKG etc. The tests showed that he had blood clots in both legs, both arms, one in each lung and one in his heart, he was hospitalized for 8 days in Rochester, MN to get the blood clots under control. The surgery to remove the tumor was put on the back burner and he was started on intense chemotherapy every 3 weeks until the nodes were completely gone and then we would discuss surgery again if the chemo worked.

Glen had treatments May, June, July and August. He spent a few more days in the hospital during those months because of the pain of the blood clots was unbearable. He missed work and things got tough for a while.We struggled through like every other family going through the same.

Fast forward to October 7th and after 2 full PETSCANs, CT SCANs (one set done on August 1st) and a chest with contrast x-ray and another EBUS PROCEDURE the surgery was a go, the scans were clear and the live cancer was gone. FINALLY!

Our surgery date was set for October 22nd and it was scary, exciting, overwhelming and again, nerve racking but something we needed to do with God’s help and guidance, for the best chance of survival. The surgery went very well until they inserted a small camera into his stomach after taking his esophagus and before they pulled his stomach up to connect him again to his throat and the little left of his esophagus and found cancer cells in his belly fat. We did not even know what to think. We thought it was over, but the next chapter for Glen was just starting.

They had to seal off his stomach and pull what was left of his esophagus out the left side of his neck, which he now has a stomach bag on the outside of his chest to collect spit and anything else that goes down his throat but is NOT connected to his stomach. In other words Glen is disconnected and cannot eat food but is tube fed/med fed and anything he drinks goes into the stomach bag. We as a family do not know what the future holds.

On December 18th Glen will have a post-op appointment. He has been healing well for such a terrible surgery, but it all takes a toll and the days get long but we keep moving forward and stay as positive as we can! We have our moments, but God has taken us this far so we believe in him 100%, he gets us through each day and I believe without him we would not be where we are. 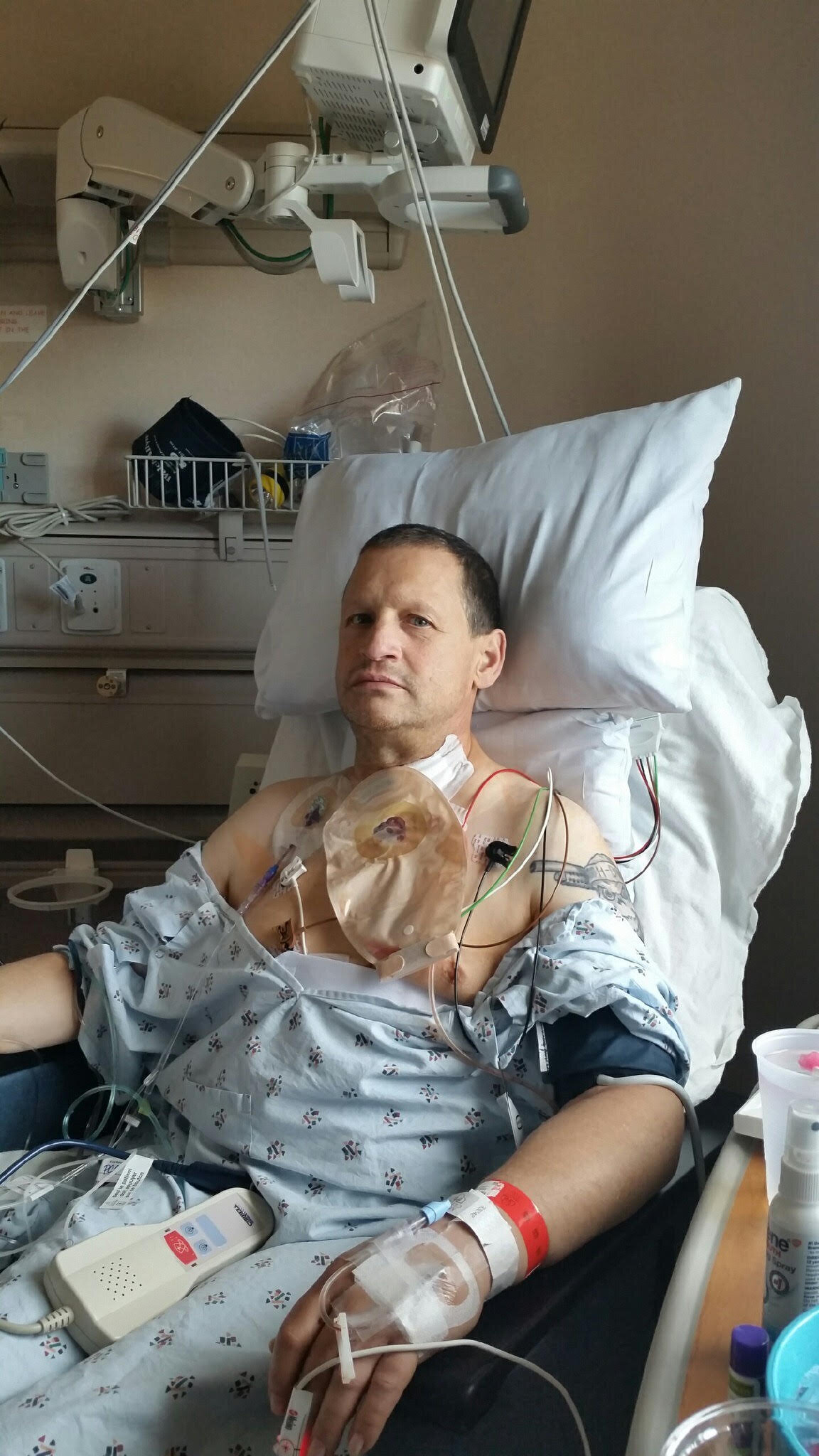 Glen is a wonderful husband, we have been together for 29 years, he is my soulmate, and he just turned 55 in November. He’s a great father to 2 great kids, a loyal brother and loving son, not to mention an uncle, brother-in-law and great friend.

He deserves his health back and to live a life without cancer, he deserves to be happy again, our whole family deserves to be happy and worry free again. I never thought being a caregiver would be the hardest job I ever had but it is. It’s hard on all of us. Please keep Glen and our family in your thoughts and prayers, we truly appreciate them all.

Merry Christmas to you all, Love The Glen Solem Family

This article was written by Glen’s wife and family. Please use this as a reminder that caregivers of those living with cancer also need to be supported. They too carry so much weight, even if they are not the one diagnosed with cancer. That is why we are here- to make sure that FAMILIES living with cancer can find the support they need. From December 11th through the 18th, use code “STORMWATCHER” to get 2 bracelets for $20*.

Please take a moment to pray for Glen while we support this storm he is facing.